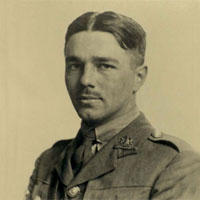 "Wilfred Owen, (born March 18, 1893, Oswestry, Shropshire, England—killed in action November 4, 1918, France), English poet noted for his anger at the cruelty and waste of war and his pity for its victims. He also is significant for his technical experiments in assonance, which were particularly influential in the 1930s.

Owen was educated at the Birkenhead Institute and matriculated at the University of London; after an illness in 1913 he lived in France. He had already begun to write and, while working as a tutor near Bordeaux, was preparing a book of “Minor Poems—in Minor Keys—by a Minor,” which was never published. These early poems are consciously modeled on those of John Keats; often ambitious, they show enjoyment of poetry as a craft.

In 1915 Owen enlisted in the British army. The experience of trench warfare brought him to rapid maturity; the poems written after January 1917 are full of anger at war’s brutality, an elegiac pity for “those who die as cattle,” and a rare descriptive power. In June 1917 he was wounded and sent home. While in a hospital near Edinburgh he met the poet Siegfried Sassoon, who shared his feelings about the war and who became interested in his work. Reading Sassoon’s poems and discussing his work with Sassoon revolutionized Owen’s style and his conception of poetry. Despite the plans of well-wishers to find him a staff job, he returned to France in August 1918 as a company commander. He was awarded the Military Cross in October and was killed a week before Armistice Day.

Search the below databases for articles about Owen.  These secondary sources will lead you to criticism and interpretation about his poetry along with biographical information.

Some of Britain's finest actors read poetry from World War I